It’s The Know-How That Counts

EQM don’t just have the right equipment to optimize your food production process, they have the know-how to put together and design the best solution.

A large strawberry producer was looking for a new conveyor system that could accommodate up to 20 people working either side of a conveyor to sort and pack strawberries. 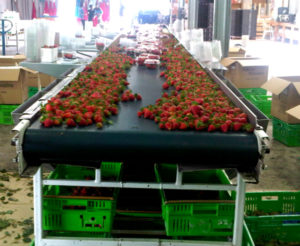 The 15 metre conveyor choosen is a modification of the popular C-Channel design and is powered by a STM SM Series Skew Axis High efficiency Gear Drive with a speed controller to operate at various speeds.

Optimum sorting and packing speed can now be found to deliver enough fruit to maximize the output of the packers, which is increasing their output to about 1800 punnets packed every hour.

“The conveyor system was based on a similar format to what they already had, just on a bigger scale and with many subtle design improvements to make it easy to clean and flexible enough to set up to suit the number of packers required each day..

“We were able to produce a 3D model of the design drawings that showed the positioning of people.

“This provided the client a better picture of how it would work and the packing station layout, which is all adjustable.

The Strawberry Packhouse came back with some modifications such as  removable packing tables and a s/s removable rack underneath the conveyor that holds crates that collect the process grade fruit at the start.

The conveyor is a kit set modular system, which was installed and up and running within 24 hours.

The entire project from confirmation of design to delivery to site took just over six weeks.

EQM is regarded as an expert in fresh fruit packing lines. Based in Hastings, Hawke’s Bay, the company has built up its knowledge and experience from being based in what is regarded as the Fruitbowl of New Zealand.