EQM often gets asked to develop innovative equipment solutions tailored to do a specific job.

One request came from a packhouse manager who was looking for a new crate filler that could also accurately record weight. 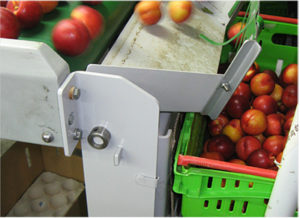 EQM Industrial already has a simple crate filler, but the packhouse manager wanted to know if we could incorporate a weigh scale within the crate filler design, cutting out the step of having to manually move the filled boxes somewhere else to be weighed.

EQM’s Anthony went and visited the packhouse before returning to the workshop to work on a new design to suit the packhouse.

What eventuated was that the standard EQM Crate Filler was modified to incorporate a scale within the loading platform.

This custom built crate filler with a weigh scale was easy to install at the end of the trayfiller, with just two bolts holding it in place.

The equipment is used for pears, but can also be used for other summer fruits as well as apples.

The new crate fillers have improved accuracy of box and crate weights which in turn has lifted pack out performance saving money.

It’s all about berries